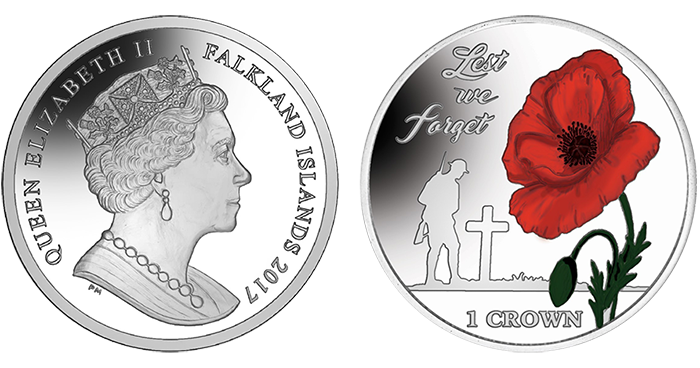 The Pobjoy Mint has issued the ‘Lest We Forget’ Poppy coins to celebrate the Falkland Islands 35th anniversary of liberation and in honor of the British soldiers who gave their lives for the sovereignty of their country. The coins are available in four different versions of the same design, copper-nickel, in silver, and with or without color. The denomination of the coin is ‘1 Crown’. Each of the coins measures 38.6 millimeters in diameter and weigh 28.28 grams. The copper-nickel coins are limited to a mintage of 10,000 pieces, between both versions. The silver coins are limited to a mintage of 2,000 coins, between both versions. Mintages between versions will be based on actual sales.

The long-running dispute between Britain and Argentina over the Falkland Islands sovereignty was brought to a head on March 19, 1982, when 50 Argentines landed on South Georgia Island and hoisted their flag. The British government, then led by Prime Minister Margaret Thatcher, responded to this attack by sending a large task force (including a member of the British Royal Family, Prince Andrew, who personally fought in the battle) to recapture the Islands. This war was one of the most unforgettable events in recent British history; British forces operated 8,000 miles from home and in terrible conditions. Almost 1,000 lost their lives during the 74-day war, which ended June 14 with the surrender of Argentina.

The reverse of the coin features the silhouette of a soldier poised in thought whilst standing over the grave of a fallen comrade. A poppy, the symbol of remembrance, featured in the foreground. The obverse of the coins depicts the Pobjoy Mint’s exclusive effigy of Queen Elizabeth II. The 1Crown ‘Lest We Forget, Sterling Silver coins are shipped in an acrylic capsule and shipped in a red box with a Certificate of Authenticity. The Cupro Nickel Coins are shipped in the Blue Pobjoy Mint Pouch.