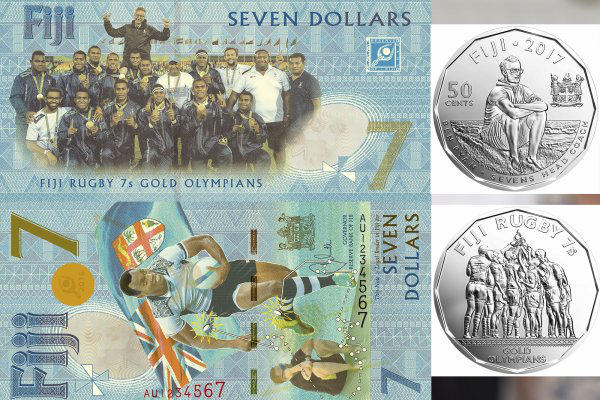 The government of Fiji is issued $7 banknotes to commemorate their first ever Olympic medal when the men’s Rugby Sevens team claimed gold in Brazil. The gold medal win was one of the highlights of the Rio Olympic Games, as Fiji became the first men’s side to win gold as the sport returned to the Olympic programme. The $7 banknotes, which are legal tender and are the only known $7 notes in circulation in the world. Two million of the $7 notes were released by Fijian Government, along with one million 50 cent coins commemorating the gold medal victory.

The 50-cent coins features the image of England-born Ben Ryan, who coached Fiji to its first Olympic gold medal, on one side, and Fiji players hoisting the Olympic trophy on the other. The 138.5 x 67 mm note was designed and printed by Oberthur Fiduciaire and the face of the note portraits Olympic captain and Team Fiji’s flag bearer Osea Kolinisau in full flight with the Fiji flag in the background and the signature of Governor of the RBF. The team coach is shown alongside, sitting on sand dunes at Sigatoka National Park. Ben Ryan, the English-born coach was also awarded the Companion of the Order of Fiji, the highest honour in the country. This is the first ever Fiji banknote have one side oriented horizontally and the other vertical.