The 2017 Southern Right Whale Silver Coin from The Pobjoy Mint 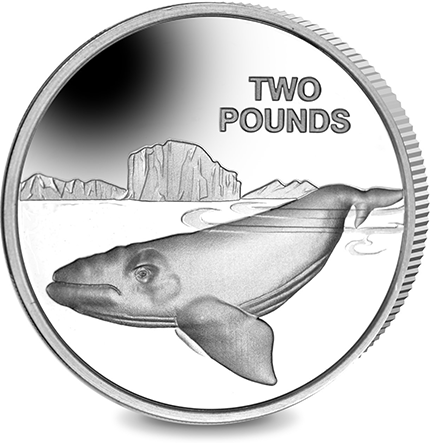 The government and treasury of the British Antarctic Territory have issued The 2017 Southern Right Whale Silver Coin, which highlights one of the more extraordinary animal species inhabiting the waters of the Southern Hemisphere. The Southern Right Whale or Eubalaena australis, are one of the largest mammals in the ocean and they can reach up to 17m in length, and weigh around 90 tons. They are unique by a few key characteristics which are the callouses on its head, broad backs with no dorsal fins and long arching mouths. The Pobjoy Mint is quite unique in minting titanium coins, this issue sticks with Sterling (0.925) silver, although a Cupro-Nickel variant is also available.

These coins are produced by the Pobjoy Mint, United Kingdom, on behalf of the government and treasury of the British Antarctic Territory. The reverse features the Southern right whale just below the surface of the water. Behind the whale, a jagged coastline of ice and rock protrudes from the icy water which is the natural habitat of this majestic mammal. The denomination of TWO POUNDS is placed, in two lines, at the upper right. The issue limit for this coin will be 10,000 in Uncirculated Cupro Nickel and 2,000 in Proof Sterling Silver. The obverse features the Pobjoy exclusive effigy design of HM Queen Elizabeth II along with the Issuing authority and year. The coins shipped with a unique presentation box and a serialized Certificate of Authority.