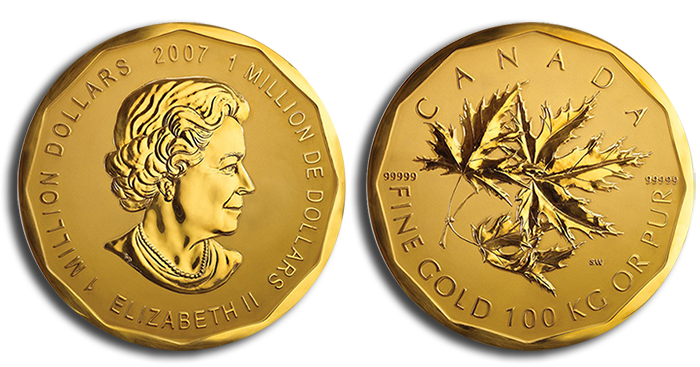 The Canadian Big Maple Leaf coin was stolen from the Bode Museum, Berlin, Germany on March 27, 2017. German police arrested 4 suspects but the police have found no trace of the Canadian Million Dollar coin. As per the police sources chances of finding the coin intact is very slim because as per the surveillance cameras the coin dropped by burglars twice on their way to the car and later it may be cut into pieces or melted down for easier sale and transport.

The “Big Maple Leaf” coin produced by the Royal Canadian Mint in 2007 with a face value of 1 million Canadian Dollars and only 6 coins are minted in this series. The 100 Kilo pure gold coin was holding the Guinness world record for the largest coin in the world till the Perth mint of Australia issued their One-Tonne Australian Kangaroo in 2012. This massive coin is 3 cm thick, a diameter of 53 cm, and an incomparable purity of 999.99/1000 pure gold. The reverse of the coin features the Canadian maple leaf design by Royal Canadian Mint artist and senior engraver Stan Witten. The obverse of the coin shows the effigy of Queen Elizabeth II designed by Susanna Blunt.

Out of the 6 coins produced, only 5 coins are sold to the public and the remaining one is still kept at the RCM Vault at Ottawa. The Big Maple Leaf was on display at the Berlin museum was belongs to Mr. Fuchsmann who had lent it to the museum in 2010. One of the other coins owns by Queen Elizabeth herself, one sold to Oro Direct- a Spanish gold trading company, and 2 of them are sold to collectors in the United Arab Emirates whose identities are not revealed. Even though the coin had a face value of 1 million Canadian dollars, actually it worth around $5 million considering the gold price and scarcity.