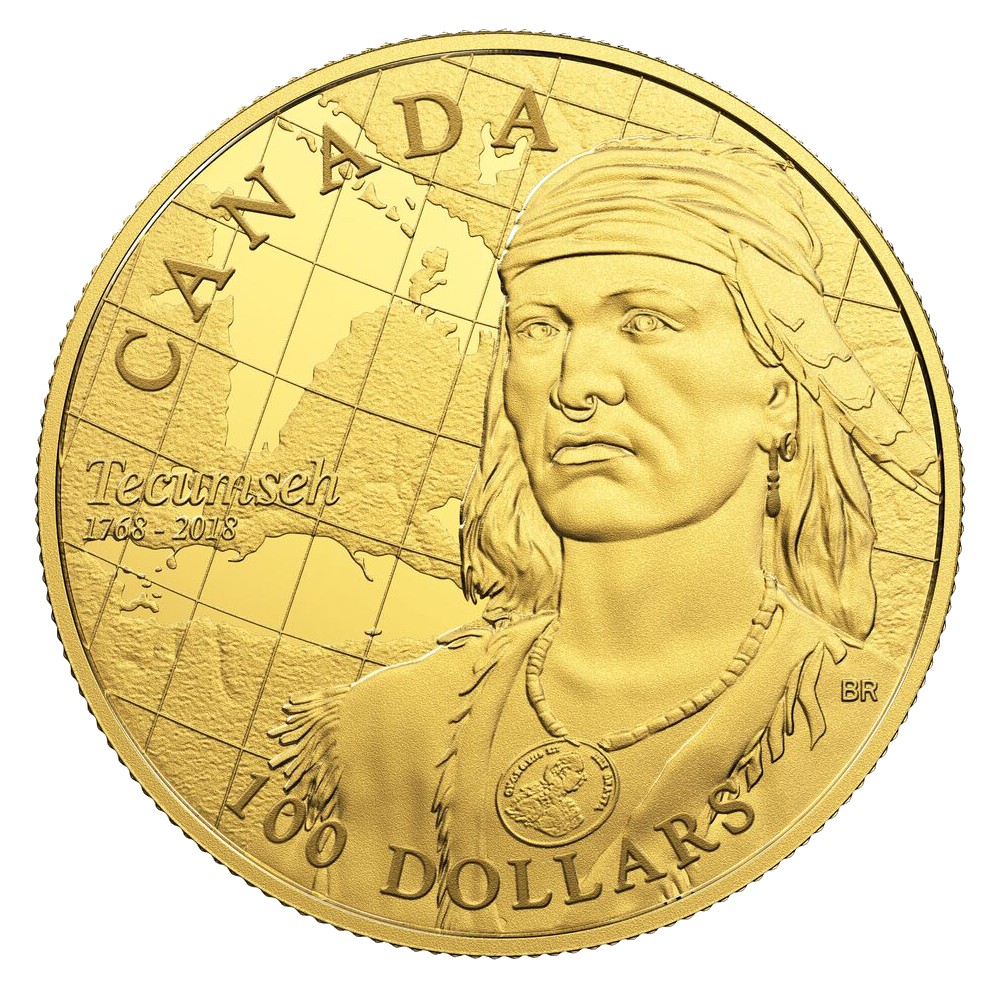 The Royal Canadian Mint has released the annual $100 Gold Proof for 2018 commemorates the 250th anniversary of the birth of the great Indian War Chief Tecumseh. Born in 1768, Tecumseh, whose name refers to “the rising path of a shooting star, like a panther leaping across the sky,” was a member of the Kispoko division of the Shawnees that focused on the War of 1812. On the 250th anniversary of his birth, this $100 Gold coin is a celebration of the life and legacy of this legendary Shawnee war leader, whose beliefs, triumphs and sacrifice are woven into the complex fabric of this nation’s history. Tecumseh was killed in the Battle of the Thames (near Thamesville, Ontario) in October 1813.

The reverse of the coin is designed by Canadian artist Bonnie Ross and features Tecumseh in his traditional Shawnee clothing with the King George III medal worn around his neck. The illustrated representation of Upper Canada circa 1813 highlights engraved in the background. It also included a precision-engraved map fills the field which are the sites of several major conflicts involving Tecumseh, including the Battle of the Thames where he was slain in 1813. The reverse includes the text Tecumseh and the commemorative dates 1768 – 2018 in stylistic 1812 typography along with the text CANADA and the face value 100 DOLLARS. The obverse features the effigy of Her Majesty Queen Elizabeth II designed by Susanna Blunt and the legend ELIZABETH II D. G. REGINA (“Elizabeth II, Queen by the Grace of God”) also appears.

This year also the mintage of the annual $100 Gold Proof coins are limited to 1,500 worldwide. This coin Contains 0.38 oz of 14 karat (58.33%) fine Gold totaling 0.22 oz of Gold. The coin is encapsulated inside a burgundy leatherette, clamshell-style presentation case, lined with black velvet and protected by a black outer box and comes with an individually-numbered certificate of authenticity.