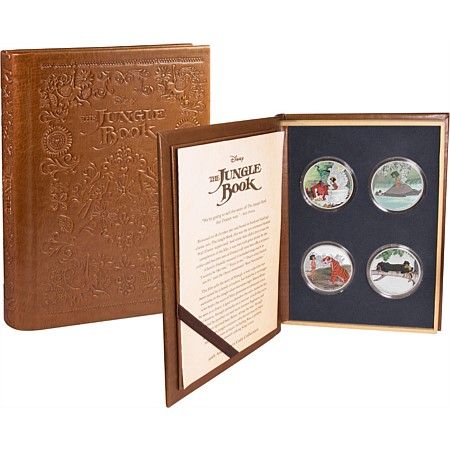 The New Zealand Mint released The Jungle Book coin collection to celebrate the 50th anniversary of Disney’s classic animated film The Jungle Book, which was released on 18 October 1967. Since this is a special anniversary collection, the New Zealand Mint is choosing not to release the four coins in the set individually as they would normally do. Instead, the coins are only available as a single proof set.

Based on Rudyard Kipling’s classic tale it was met with great praise by the critics and became one of Disney’s all-time box-office winners. There are four 1 oz fine silver coins in the collection. Each coin features a classic image of Mowgli with another key character from the film, namely Baloo, Bagheera, Shere Khan and King Louie. Each 1 Ounce coin has vivid colors. All four coins are nestled in velvet inside themed, antique-looking story-book style packaging. The delicate embossed pattern on the front cover is inspired by Disney’s The Jungle Book. The Certificate of Authenticity is found inside the front cover and provides further insight into the film and the characters featured on the coins.

The reverse of these beautiful four Silver coins shows the Disney movie’s character (Mowgli), the key character of the film. Each character is portrayed in full colour against a relief inscribed background. The bottom of the coins reads as: “1 OZ 999 FINE SILVER” – the weight and the fineness of the Silver and “DISNEY” – the animation studio. The coin’s obverse depicts the effigy of Her Majesty Queen Elizabeth II and the inscriptions: “ELIZABETH II” – the name of the Queen, “NIUE” – the issue country, “2017” – the issue year and “TWO DOLLARS” – the face value. The Jungle Book 50th anniversary coin collection has a limited mintage of 10.000 pcs worldwide.