New 20 Pounds Polymer Note From The Bank of England 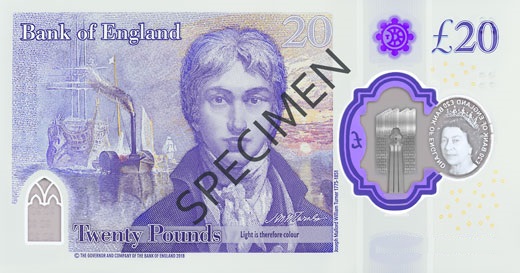 The Bank of England the new £20 polymer notes featuring artist J.M.W. Turner. The new notes are in circulation from February 20, 2020. As per the bank spokesperson with advanced security features, this is its most secure banknote ever printed. The new £20 is the third polymer banknote to be issued by the Bank of England. One of the main reasons to convert the 20pound banknote is counterfeiting, as per Bank of England, 88% of reported counterfeit banknotes in the UK are £20 bills.

The new 20 Pounds banknote featuring a self-portrait of the artist J.M.W. Turner and it replaces the paper bill with the picture of Adam Smith, which has been in circulation since 2007. The new polymer note also shows his famous painting “The Fighting Temeraire”.

Joseph Mallord William Turner was born in Covent Garden on April 23, 1775. At the age of 15, Turner became a member of the Royal Academy of Arts and in 1790 his watercolor was accepted for the academy’s summer exhibition. On 19th December 1851 J.M.W. Turner died in London at the age of 76. In his lifetime, Turner produced more than 550 oil paintings, 2,000+ watercolor paintings, and over 30,000 sketches and drawings. In Memory of this 19th century great artist, The Turner Prize presented to the best British visual artist since 1984. Malcolm Morley is the first artist to revive the Turner Prize in 1984.

The Special security features in the new 2 Pounds polymer notes are;

As per the Bank of England, there are currently two billion £20 notes in circulation. The old paper £20 is still valid and the bank will give six months’ notice ahead of its legal tender status is withdrawn. The new £20 note is the first to have the signature of the Bank’s current chief cashier, Sarah John.

Image and Text Courtesy – The Bank of England