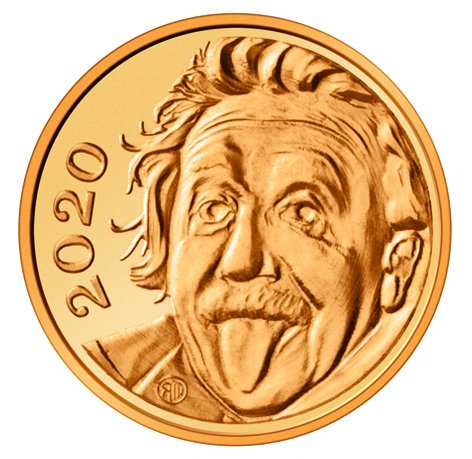 The Swiss mint released the 2020 Quarter of Swiss Franc gold coin. The coin features one of the world’s greatest physicist Albert Einstein. With a diameter of 2.96mm and weighing 0.063g, this pure gold coin is too small to see the coin details, so the coin shipped with a special magnifying glass!. The 2020 commemorative gold coin designed by Swiss engraver Remo Mascherini.

Albert Einstein was born on 14th March 1879  in Ulm, Germany and was the first child born to Hermann and Pauline Einstein. Einstein’s family moved to Munich, Italy, shortly after his birth because Mr. Hermann’s Electrochemical factory was not doing well. In 1901 Einstein received his diploma to teach physics and mathematics from the Swiss Federal Polytechnic. In 1903 Einstein married Mileva Maric and they had two children, Hans Albert and Eduard.

In 1905 at the age of 26, Albert Einstein awarded his doctorate from the University of Zurich. The Nobel Prize in Physics 1921 was awarded to Albert Einstein “for his services to Theoretical Physics, and especially for his discovery of the law of the photoelectric effect. On 17 April 1955, Einstein experienced internal bleeding and died in Princeton, New Jersey. During his 76-year life journey, he published more than 300 scientific papers and more than 150 non-scientific works. The most famous work of Einstein is “the world’s most famous equation” – E = mc2 and the theory of relativity.

The obverse of the 2020 Switzerland 1/500 ounce coin shows the famous image of Albert Einstein sticking his tongue out, and the year of production “2020”. The reverse of the coin features the coin face value “1/4 franc”, the inscriptions Issuing Country – “Helvetia” and the Swiss cross, the metal and Purity – “AU 999.9” and the weight – “1/500 ounce”. The 2020 Einstein commemorative coin is having a limited mintage of 999 coins worldwide. The coin shipped in a special box along with a magnifying lens and light to view the coin in detail.