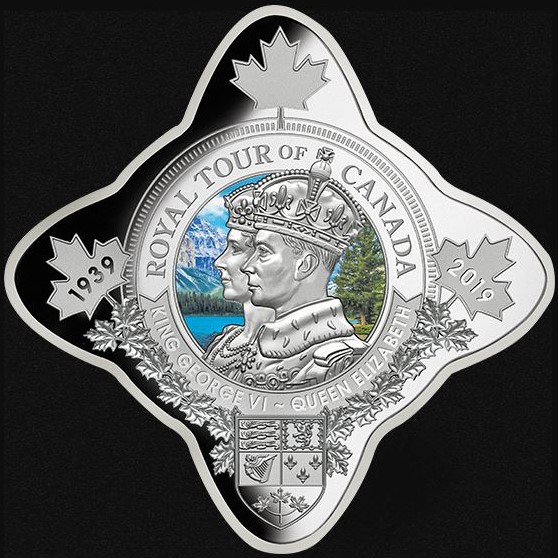 The government of Niue released the 2019 Royal Tour of Canada 1 oz. Pure Silver commemorative Coin to celebrate the 80th anniversary of the 1939 royal tour of Canada by King George VI and Queen Elizabeth. This special commemorative silver coin has a unique shape of the four-pointed Royal Star. The proof finish coin having serrated edge and diameter of 40X40 mm. The coin having a limited mintage of only 2000 coins worldwide.

The Royal visit was occurred 80 years ago from May 17 to June 15, the royal couple visited every Canadian province during the 1939 visit. King George VI and Queen Elizabeth arrived in Quebec City by ship and the Canadian Prime Minister William Lyon Mackenzie King accompanied them throughout their rail journey which had almost 80 stops across all Canadian provinces. To commemorate this event Canada was issued a silver dollar in 1939 (the second ever Canadian commemorative silver Dollar).

The reverse of the 2019 Royal Visit silver coin design features the dual effigies of the King and Queen originally designed by British engraver Percy Metcalf 80 years ago with a background of Canadian landscape in color. The reverse design also having the “The Coat of Arms shield”, Canadian Maple leaves, The Royal visit year “1939”, Year of issue “2019”, inscriptions- “ROYAL TOUR OF CANADA” and “KING GEORGE VI ~ QUEEN ELIZABETH. British sculptor Ian Rank-Broadley’s famous effigy of HM Queen Elizabeth II can be found at the obverse along with the floral symbols of the United Kingdom; the rose (England), thistle (Scotland), leek (Wales), and Shamrock (Ireland). The Obverse also inscribed by the Issuing country & Year “NIUE 2019”, Face value “ONE DOLLAR”, Silver purity “1 OZ 999 Silver” and the Queens name “ELIZABETH II”

These limited edition coins are encapsulated and shipped with in a special case along with a numbered certificate of authenticity. Coins are on sale at the Royal Canadian mint website.